Canals Online asked me to write a piece about my motivation in producing a series of tuitional DVDs on traditional narrow boat decoration: I thought it would be easily done. However, having thought about the subject for three or four days now, it seems it was harder than I expected it to be!

To do so I must go back forty years, to the beginning of my career on the canal. The first roses and castles I painted were much admired by friends and family. This, and my own satisfaction with them, was – I now realise – misplaced. In short, they were attractive in their own way, but WRONG. Not perhaps wrong in their actual appearance, but wrong in the description I knew them by. I described them as ‘traditional canal art’ and certainly, the word art in itself begs the question – was it in fact art, or was it craft? The distinction has not gone away with the passing of the years. It’s still a valid question. My bigger error was in describing them as ‘traditional’. I did so because at that time, I had not made the in-depth study of canal art and culture which I am still pursuing to this day. It seems to me that, innocently enough, my mistake is one that many modern painters still make.

Times have changed on the canal. The ‘old days’ are fading and a whole new community of canal dwellers and leisure boaters has arrived. This cannot be a bad thing, because it ensures that we still have canals to enjoy. With it has come a whole new generation of painters, many of whom have taken up painting roses and castles. A substantial number of these are producing attractive work, which is much admired but has drifted away, over the years, from the original.

Roses and castles were, in the days of the working boats long before the leisure boom, part of the culturally important decoration applied to the boats. Working canal families, a completely separate subculture, had many cultural, social and working practices that were entirely their own. The decoration on the boats was of great importance to them. It appeared not only on the boats themselves, but also on some items of boating equipment: water cans, nose tins, hand bowls, cabin stools, seat boards and so on. The flowers were bold, as big as the space would sensibly allow, and painted with great verve and vigour.

Nowadays the painting has, quite understandably, spread to all manner of items which can be acquired, painted and sold more easily than the original boating equipment. As a result of this, when some of this painting is applied to boats and associated items, it does not have the power and panache of the original. It has been developed for much smaller articles, and a much different market. None of this implies any criticism of the excellent painters who are producing this work. It is simply that the traditional motifs which we all love have, of necessity, been greatly modified and adjusted to suit a completely new range of artefacts. Consequently, they can’t rightly be described as ‘traditional’ good as they are.

Now, to my DVDs. They were produced for a number of reasons. One has to be money! But be assured that the amount earned this way should be seen as beer money, not a significant proportion of my income. Secondly, they are self-published and I suppose there must be a degree of ego or vanity involved.

The main reason, though, is that I wanted to record, for the benefit of newcomers to the art (or craft), the things I have learned about the real tradition and its practice over forty years of continuous learning. I hope that although I myself still have much to learn, my pursuit of this important area of English cultural heritage will be of use to those who really wish to learn it.

This is my contribution (though others of great scholarship have done so much more) to preserving our canal heritage. Hopefully future painters will be able to look at my DVDs and add my research to their own, to produce something even more authentic. 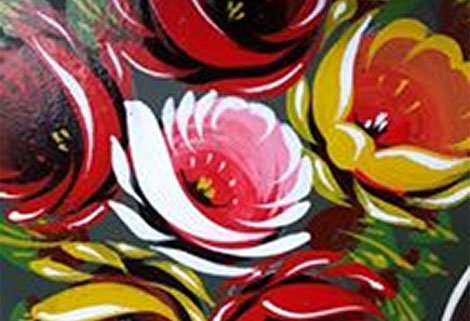 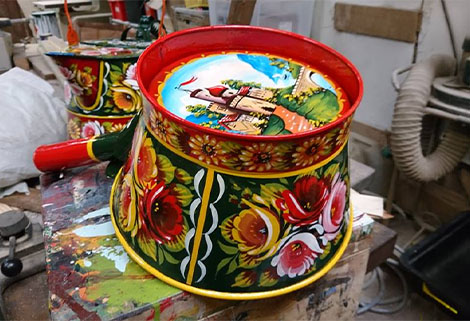 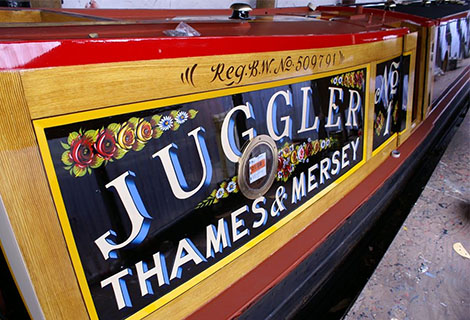 The 5 disc box set To the point - Signwriting is available for £25.