the heartbeat of the inland waterways

Although officially relaunched in June 2020 after the first wave of COVID-19, Canal Radio UK was originally created in 2018 by its founder and owner, DJ and Radio Presenter - Pete Unstead. 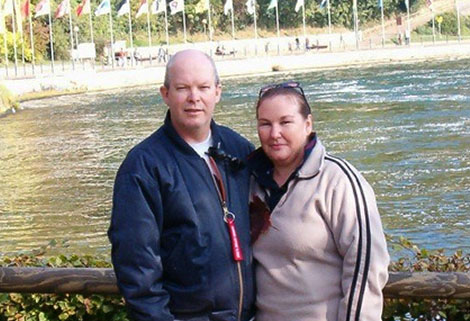 The concept of running an Internet radio station from a narrowboat on the inland waterways, came to me in 2018, when my Tracy and I decided we wanted to join the waterways community of cruising narrow-boaters in Great Britain. We were initially inspired by a TV series we found on YouTube called ‘Great Canal Journeys’ with Prunella Scales and Timothy West. We soon succumbed to the idyllic lifestyle that narrowboat cruising had to offer.

We are minimalists and the idea of living off grid in a tiny home appeals, and although we are not officially retired yet, the narrowboat idea and living on it permanently falls into our retirement plans. I often thought about what I could do to compensate for our living expenses during our retirement, whilst constantly cruising around the UK on a narrowboat and that's when the idea of a canal based radio station came to me.

I first started in radio when I was a lad of 15 years in Southern Africa. I had a Saturday morning 1 hour slot on Steam Radio in a hospital, piping music to patients throughout the wards. From there, I guess my passion for music grew and I have been a DJ now for over 40 years, and more recently in 2011 I joined the world of Internet radio as a Presenter. My career in Information Technology since 1985 has armed me with the skills I required to build and run a radio station over the internet. Back then this stuff was cutting edge technology, unlike today.

I came up with the name, ‘Canal Radio UK’ and its slogan, ‘The heartbeat of the inland waterways of Great Britain’ as a fitting brand identity for what we are trying to achieve. The station is targeted to all people in the UK with an interest in the canals and rivers as well as other boaters around the UK and of course the businesses that live and work on the canal networks. Research I have done suggests that the number in 2019 was around 650,000 people and growing each year. If we had 1% of that number (6,500) we would be very happy. The plan within 3 years is to have around 10,000 concurrent listeners a day.

Canal Radio UK has a Website, a Facebook page and soon we are launching our Instagram account, which is used to communicate and promote the station on social media as this is the most popular platform to get the word out.

The physical radio station (which is 100% internet based) is currently operated from a land based radio studio in our house, with the idea of moving this onto a canal boat in the future so we can move around the canal system. I am working on some plans at the moment and hope to get advice from boat builders on different design ideas. 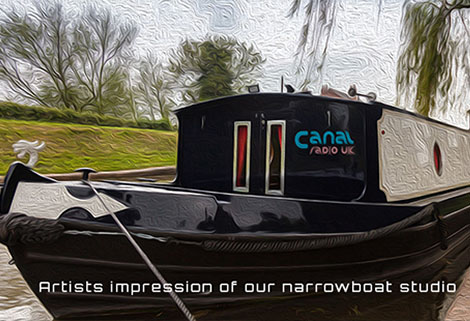 How the station works is like this. The home studio (audio desk) links to a cloud based streaming server via an internet router connected to the web, and listeners connect to the station (streaming server) via the website and/or other numerous app sources such as Tuneln.com and My-Tuner Radio, who are well known Internet radio search directories. A person can listen to the station using any number of devices connected to the internet including but not limited too; mobile phones, iPads, laptops and desktops, digital car radios, Internet radios and smart TV’s with android operating systems. Literally any device connected to the internet that has a built in media player can listen to Canal Radio UK.

With my previous knowledge of running Internet radio stations since 2011, I am more than capable of content programming a station with a mixed genre that is not ‘locked in’ to a single genre or profile like most other terrestrial radio stations.

"We are an independent radio station, which means we  play  what  we  want,  or what the listeners want to hear, rather than what the networks and corporations  want us to listen to. Having a mixed genre in  2011  was  a  gamble  and  I  was warned by colleagues in the industry that it will never work.  Well they  were  wrong! It was a huge success when I started Blenz 107.4 back  in  2012  and  it’s  still  a success today. I constantly get comments like “Listening to your  station  is awesome, because you never know what type of song, or what artist is coming up next so you keep listening to see who it is”. It’s people  like  that  we  target  our station towards and now that we have a specific community to support like the inland waterways of the UK, I am confident we will reach our 3 year target  of 10,000 concurrent daily listeners by 2023”. - Pete Unstead (Station Manager)

The world of technology is changing at an ever increasing rate, and I predict within the next decade we will say goodbye to conventional terrestrial (FM / AM) radio stations. With fast mobile Internet now available to almost 99.9% of the population as they go about their daily lives, streamed digital media is the way people will listen to music and talk shows, podcasts etc. By 2030 all available news, music, and video entertainment will be streamed via the internet.

Canal Radio UK’s streamed content is currently in its first phase, which means it’s more of a 24/7 mixed music station with a little bit of talk radio and a few podcasts. As it grows the station will incorporate more talk radio, podcasts and interviews into its daily scheduling. 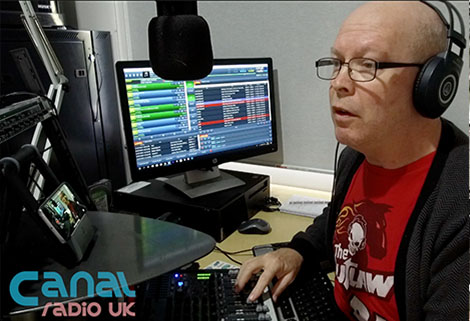 The station started with only one Presenter-DJ, me, and now it has 5 volunteer British DJs and one American DJ who all stream their music shows each weekend from their own home studios. More are joining us every month. We hope to have a panel of around 10 regular station presenter DJ’s by the end of 2021.

Canal Radio UK is also hoping to promote a Youth Radio Project (Canal Radio YRP), an idea I came up with in 2013. The concept is for youngsters between the age of 10 and 15, to learn about Internet radio streaming and station etiquette and become part of a community of young presenters across the waterways.

There are current vacancies for station operational staff who have had some radio station experience in a previous life to join us as volunteers. So, if you or anyone you might know would be interested in helping manage the daily operations of an Internet radio station, be it in an administration role, content programming or any perhaps a technical role, then please contact me, the Station Manager, at station.manager@canaIradio.uk I would love to hear from you.

News and stories relating to the canal network and river system of UK will soon be discussed during our live shows on the weekends and we (Canal Radio UK) want to work as closely as possible with organisations like CRT and IWA to provide our listeners with useful content such as, canal and river maintenance updates, waterway social events and canal closures. We provide this information already via our social media posts on our Facebook page.

The station will eventually have slots available for broadcast on the weekends, for narrowboat owners who want to buy or sell their boats and potentially interact with boat brokers and boat builders. There will also be a weekly Canal Community News segment where non profit organisations can use this platform for free, to inform the inland waterways community. This is scheduled for 2021. 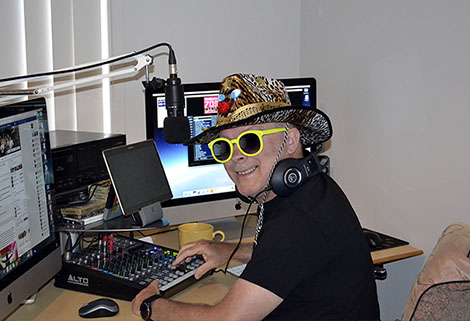 Canal Radio UK’s mixed music genre consists of a mixture of classic hits, some Top 40 hits, a little R&B and some Blues, and is finished off with a splash of classic rock and a few classic ballads. The station streams live from the current studio for 18 hours a day, opening up at 6am and closing down at midnight GMT. Between midnight and 6am we stream an automated playlist of chill out lounge and soft jazz to ease you through the night.

Canal Radio UK is a great marketing and advertising tool for all businesses on the canal networks. The station offers an affordable high quality radio imaging service to its customers, as well as a range of other services like website design and hosting, social media content management and electronic brochure (flippable ebook) creation. We currently have four UK sponsors and we are looking for more to join our radio station family.

We currently hold a LMOL (Limited On-Line Music License) and we are licensed to stream music over the Internet through ‘PRS For Music’. You can listen to us anytime by visiting our website at https://www.canalradio.uk and click on the Listen Now button in the menu. The website also has everything you need to know about the station, as well as how to get in contact with us should you wish to communicate with us. Please also visit our Facebook page by searching ‘canalradiouk’ on Facebook or Google and Like us for updates about shows and news about the station. Let us know your comments, we would love to hear from you. We hope you like what you hear!

Canal Radio UK is the only online music radio station dedicated to serving the community of the inland waterways of Great Britain. Our target audience are everyday people with an interest in canal boats and river cruising around the UK as well as the waterways community of businesses and liveaboards.