water water everywhere but not a drop to drink

The Aquonic watermaker designed to turn river and canal water into drinking water is the latest in a number of unique products brought to inland waterway boaters in the UK by Mactra Marine Ltd.

Mactra Marine was started back in 2005 after Jim & Ann MacDonald returned from a one year 11,500 mile Atlantic Circuit with their two young daughters on their 33ft sailing boat.

On the Atlantic crossings water was a very precious commodity and the MacDonald family supplemented theirs with the purchase of a very small second hand electric desalinator. It was this that started the interest and on their return, Jim and Ann set up Mactra Marine to supply niche Blue water sailing equipment to Ocean sailors. The years rolled on and Mactra Marine became well known for their service to sailors and ocean rowers around the world. Lizzie, their oldest daughter joined the business in 2010 and today they continue to supply the well known Schenker and Katadyn desalinator ranges as the UK dealer.

The inland waterways had never really been considered as a market, as desalination uses high pressure to take the salt out of seawater. The equipment is expensive and whilst the reverse osmosis seawater membranes will purify river and canal water, its over specified for the job.

Inland Waterways and the Aquonic Watermaker 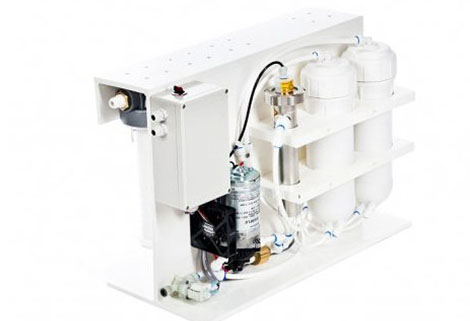 Mactra Marine were approached by the German manufacturer of their certified watermaker the ‘Aquonic’ and were asked if they would be the UK distributor for it. The Aquonic was launched in the UK at the Crick boat show last year. Its process takes water from rivers and canals and feeds it through a seven stage filtering system. First the water is sucked through a mesh filter, taking out large particles and lumps of weed. It then goes through a 20 micron filter, and a 5 micron filter before going through low pressure reverse osmosis membranes. Finally the water passes through an ultra-violet filter to kill bacteria and a remineralising cartridge where valuable minerals that the process will have removed, are replaced. The filter elements are inexpensive to replace and the membranes themselves only need changing once a year. The Aquonic can produce up to 120 litres of fresh drinking water an hour using 170 Watts at 12V. 24V versions are available.

“It’s very clear to see what benefit users will get from an Aquonic” said Liz MacDonald of Mactra Marine. “The Aquonic takes away the need for the boater to go into marinas to get water, or need to queue up for water in the high season. It gives independence and self sufficiency for the boat owner.” 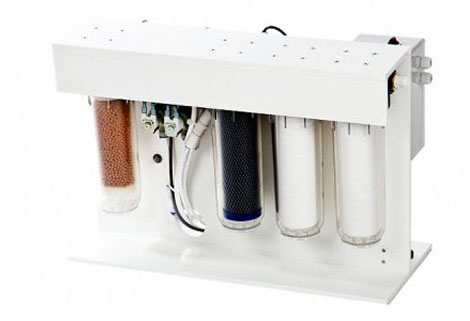 Installing the Aquonic is straight forward and is well within the scope of a handy boat owner. The intake can be shared with another skinfitting, or if it is not going to be used when under way, a weighted hose hung over the side into the water will suffice. Most of the hose connections are ‘pushfit’. The produced water can be led directly to the vessel’s tank, or via an L port valve to a faucet in the galley to allow tasting or filling up of water bottles to chill in the fridge. The unit is controlled electronically with a remote switch, allowing it to be installed out of sight.

The Aquonic comes with everything needed for installation. It costs £3243.00 Plus VAT if applicable (There may be an option to buy VAT Free, if the vessel is a ‘qualifying vessel’ as per HMRC  guidelines).

"We believe that the products that we sell are the very best available on the market today. We have overseen hundreds of installations by boat builders, marine engineers and by owners themselves. Our equipment is fitted on vessels ranging in size from super yachts to ocean rowing boats. As sailors ourselves we use this marine equipment on our own boat - so we know exactly how each product works."
Jim & Ann MacDonald