Like most people of my generation I remember England doing well in a certain football tournament.   It was a big thing.   I remember the winning goal which was heard loud and clear on a Ferguson transistor radio somewhere on the Thames.   This was during our first holiday on a boat that belonged to  the family. 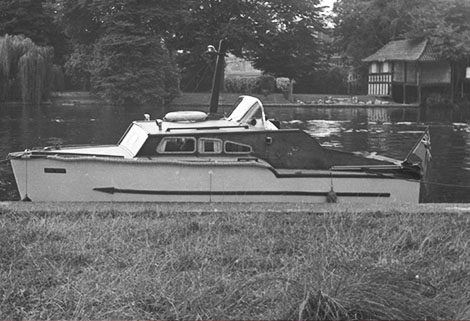 A modest windfall that spring meant we were able to buy a 16 foot,  two berth “Rutland” cabin cruiser which the owner said was an Uffa Fox design.   As a nine year old, I hadn’t a clue what that meant but I was sure it was a good thing.

The boat was powered by a 10 horsepower Albin petrol engine, had a few creature comforts and bore the name “Lady Jena.”

All seemed well apart from the fact that there were four of us.   This meant we needed 2 extra bunks and some more storage space so out went the water tank and sink.   Given the tank was corroded and the sink scratched and cracked, it didn’t really matter.   Out too went the petrol stove which my mum decided was dangerous, to be replaced by a succession of methylated spirit stoves, some of which definitely were!

With a bit of fiddling about, we were good to go on holiday up and down the Thames again.   That’s when we discovered that the motor wasn’t too reliable, often stopping in midstream or refusing to start when we had to exit from a lock. 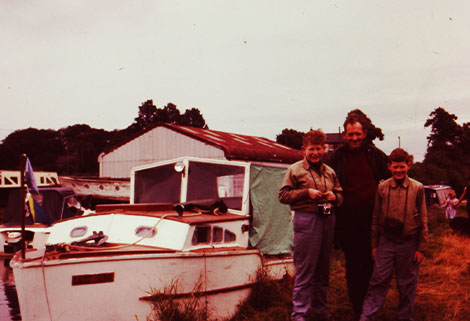 It was our boat and we were on holiday in her so, to me, she was the best craft on the whole river despite the discovery of a couple of soft spots in the plywood hull.   On a good day, the motor had a good solid twin cylinder thump that sounded as though it could run forever and we plodded the familiar route to Lechlade and back, pausing to hear the famous words “They think it’s all over… It is now,” whilst waiting to go into Penton Hook lock.

The next year, mum and dad decided to explore the canals (beginning my lifelong love affair with the things).

With a few more modifications, which included an escape hatch, removal of the mast, a transom bunk, a new and even more dangerous methylated spirit stove and an upgraded  toilet (which was truly evil) we set off.   Our trip took us to Napton and back, with a quick trip to Lechlade thrown in. 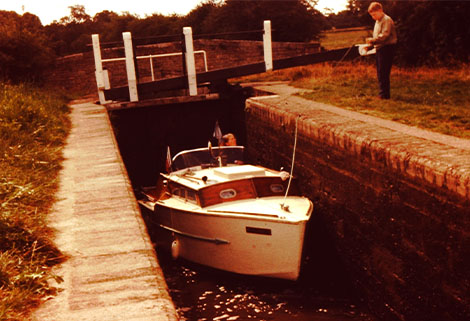 The next year, we got a bit beyond Braunston, becoming a bit more adventurous with each passing holiday.

Modifications to the boat were planned and executed during the year, the most major of these being the covered cockpit.   This changed the appearance of the craft and, to my eyes, made it look a bit ungainly.   It did at least provide a space that didn’t leak when it rained.   The old pram cover was little better than being out in the open, and we never did get far with stopping the cabin top leaking.   This wasn’t helped at all when a gust of wind somewhere near Somerton deep lock caught the back of the boat causing the cover to be ripped on the arch of a bridge during a thunderstorm.   We carried on undaunted whilst Mum sewed the thing back together with an embroidery needle and white cotton as the storm continued unabated.

When my brother and I were old enough, we were given the privilege of operating the locks, this also being the first year we had a go at the Hatton flight.   I found the mechanisms rather odd after the rack and pinions of the Oxford canal and, whilst easy to work, the things gave me a good few blisters from the rough cast BWB standard windlass that I was using. 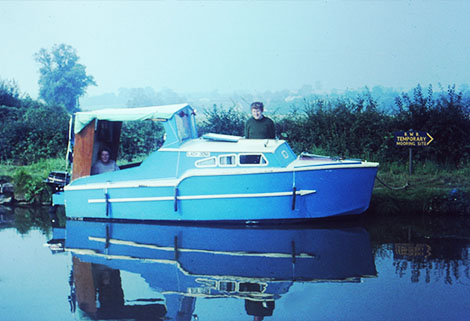 This, I think, was also the year that our holiday nearly came to an abrupt halt at Henley on Thames when a small hourly hired aluminium motorboat put a hole in our side.   We heard someone shout “Slow down.”  They sped up and the sickening thud followed.   We had a hole you could nearly put your head through just a few inches above the waterline, and the occupants of the motor boat had done the proverbial runner.   The yard helped us out with some plywood to patch the hole and we were on our way within a surprisingly short time.   I’m not sure what was paid by who or to whom but we still had a decent holiday out of it.

I remember one year where the engine didn’t break down, the sun shined (no problem with leaks) and just about everything went well.   I also remember that during the following winter, Lady Jena sank.   She rose from the watery ashes to return to the river with a new sheet of plywood replacing the one with the soft spots, and new blue paintwork.   Also, because of the need for space, and water damage to the motor, it was decided to power her with an outboard.   The first of these, an “Ocean four plus,” lasted us from Kingston upon Thames to Kiddlington in Oxfordshire whereupon it seized up solid and was returned under warranty.   The replacement, a 1967 Mercury 3.9 was an absolute gem and powered Lady Jena until another young family bought her from us in 1972. 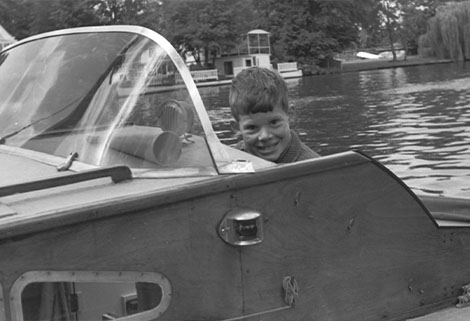 Overall, my memories of our first boat are very happy ones.   I could forget about school and let myself be fascinated by my surroundings even when I had to keep a diary one summer for a school project which was forgotten about the following September.

The diary became the backdrop to my first book “Mayfly” and the little Rutland cabin cruiser appears in my third book “Emily’s Journey” as “Willow Wisp III.”   In the book I decided to give her a rather more reliable motor though.

For all these reasons, I remember 1966 as the year Lady Jena changed my life.

There was something about some football match too I think.